Some places are meant to be shared. Admittedly, the bathroom is not the first room you'd think of when conjuring up thoughts of family sharing and co-habitating (am I making you feel claustrophobic as you imagine lineups down the hall and teenagers screaming?). Well, in Utopia, I'm sure everyone has their very own bathroom, and no one needs to work through the issues of multiple generations going about their daily routines in a shared space, but in my world, where renovation dollars and available square footage are limited, tradeoffs have to be made.

When it came to tackling the addition I prioritized better bedrooms with better storage and a single, shared family bath (for three bedrooms) instead of trying to squeeze two bathrooms into a limited amount of space. Sure, when building, it's not that much more to add a few extra feet to make it work, but it's not capturing the space that drives the budget, it's finishing it off properly (can you hear the sound of budget creeping ever higher?). Instead of scrimping and saving on two spaces that would both be less than awesome, I put all my pennies in one place and decided that, if done right, sharing would be better than splitting.

Indulge In Bigger Is Better

Once you've committed to a single bathroom it's much easier to supersize it to suit the whole family. A larger room offers better storage options and more circulation space, thereby making sharing that much easier. When everyone has space for their stuff, it's far easier to keep clutter at bay. Thanks to the long, narrow plan of the addition, the bathroom is the same depth as the kids' bedrooms, yet just wide enough to house everything needed and allow room to circulate. It's also strategically placed as a buffer between the master bedroom and kids' bedrooms to give a modicum of privacy during the teenage years when no one wants to be too close together.

My bathroom started with a straightforward wish list: soaker tub, separate shower, big window, and roomy vanity. I dreamed of leisurely soaks in a bath filled with bubbles up to my chin while gazing out the window and watching the clouds roll by. Instead of a giant, 42-inch wide tub that takes forever to fill, I wanted depth and sculptural presence. In a world dominated by moulded plastic monoliths, I found my idea of perfection it's elegantly scooped and beautifully executed in volcanic limestone (mixed with resin). This sort of exceptional beauty comes at a price (about $4,000 gulp!), but once I get stuck on a vision and find the one, it's hard to settle for anything less. The upside is, I only needed one tub, not two (are you buying my rationalization yet?).

My mantra says that if you splurge on one, you must save on the next, so the shopping gods were working in my favour when I opened my inbox one day to find a photo of a matched pair of pine dressers from a dealer I rely on for his exceptional eye and enticing price points on vintage and antique treasures. Two chests with perfect proportions (36 inches high, 21 inches deep, 39 inches wide) priced at $350 each were a beyond-fabulous bargain not to be passed up. Imagine finding 6 ½ feet of vanity for $700! The best part of the pairs approach is that it breaks the typical mould of the double sink vanity, eliminates the need for custom and brings a sense of authenticity to a room that is generally predominated by all things new. A bonus is that the space between the two allows enough room for hanging towel storage.

Rise To The Occasion

Mirrors can be the Achilles heel of bathroom design. Often just not quite there (in the sage words of my design partner, Tommy Smythe), bathroom mirrors seem too often to be an ad hoc last minute solution. Too small, or more commonly, too lacklustre in design, the mirror can be the big letdown in the room. Standard proportions dictate a rectangular shape that is rarely perfectly proportioned. This bath has soaring ceilings, so I opted for a custom route to reflection. A chunky light wood frame, highlighted with a fillet of white painted wood, mimics the same tones found in the chests and the white china sinks. At just under $400 each and almost five feet tall, the mirrors are a dramatic play on the scale of the room and on par with in-stock retail pricing (yet they're two of a kind).

Everywhere your eye travels, the mix is the same. Vanities, mirrors, floors, walls, shower and fabrics are tied together with a linking element of sand beige and white. I've long found beige too bland on its own, but when tied to a crisp accent of white I can appreciate the nuances of shade and softness of tone (not to mention it's forgiving wear 'n' tear properties and longevity as a classic palette). When going with a definitive two-colour scheme be sure to introduce it repeatedly, yet subtly, for maximum effect. Executed strictly in cream marfil marble, the floor would have been less than luxurious, but thanks to one of my signature (and perhaps all-time favourite) tile patterns that I designed to look like a trellis, the floor is fanciful if not fancy.Bring out the country classics

Bring Out The Country Classics

The hard surfaces establish the character of the bathroom, but the finishing touches express the personality and are the most fun. To frame a fabulous view I opted to parlay preppy style with cotton plaid drapes at less than $10 a yard. In a room that can sometimes dive too far into the domain of pretty-dom, this fabric seems to typify the vibe of laid-back country charm. To further embrace the outdoor trellis motif I found a vintage trellis-backed chair and upholstered in it a durable embroidered canvas with oversized blooms, then found a charming old bird cage in the room's shades of blue and white at a country flea market that sits atop a cheap old pine cabinet that I turned into a DIY project and spruced up to amp up the storage quotient. Thanks to some peeling paint and down-to-earth accents, this elegantly appointed bathroom is chic enough to be a master ensuite and makes sharing stylish. 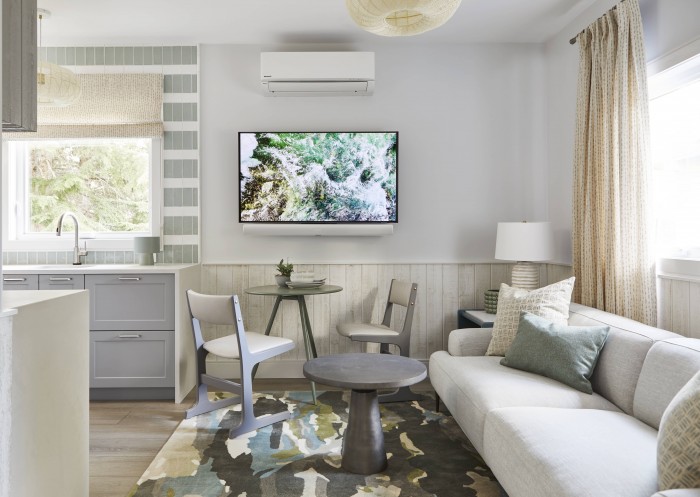 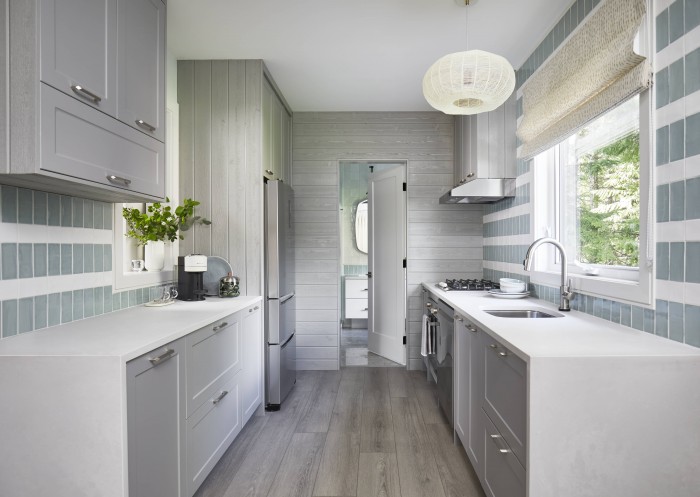 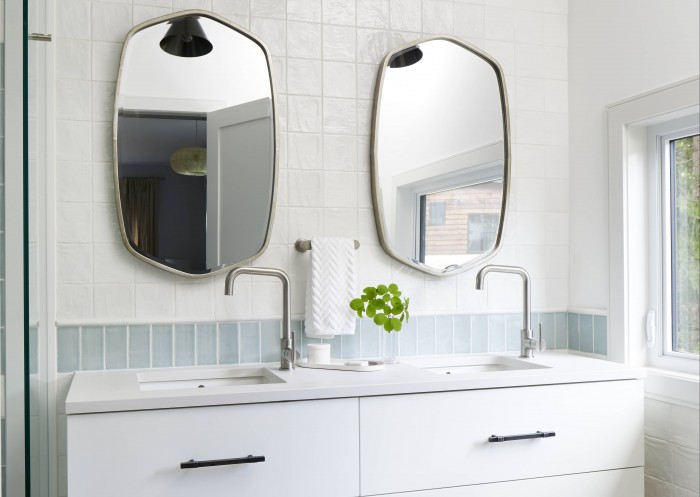